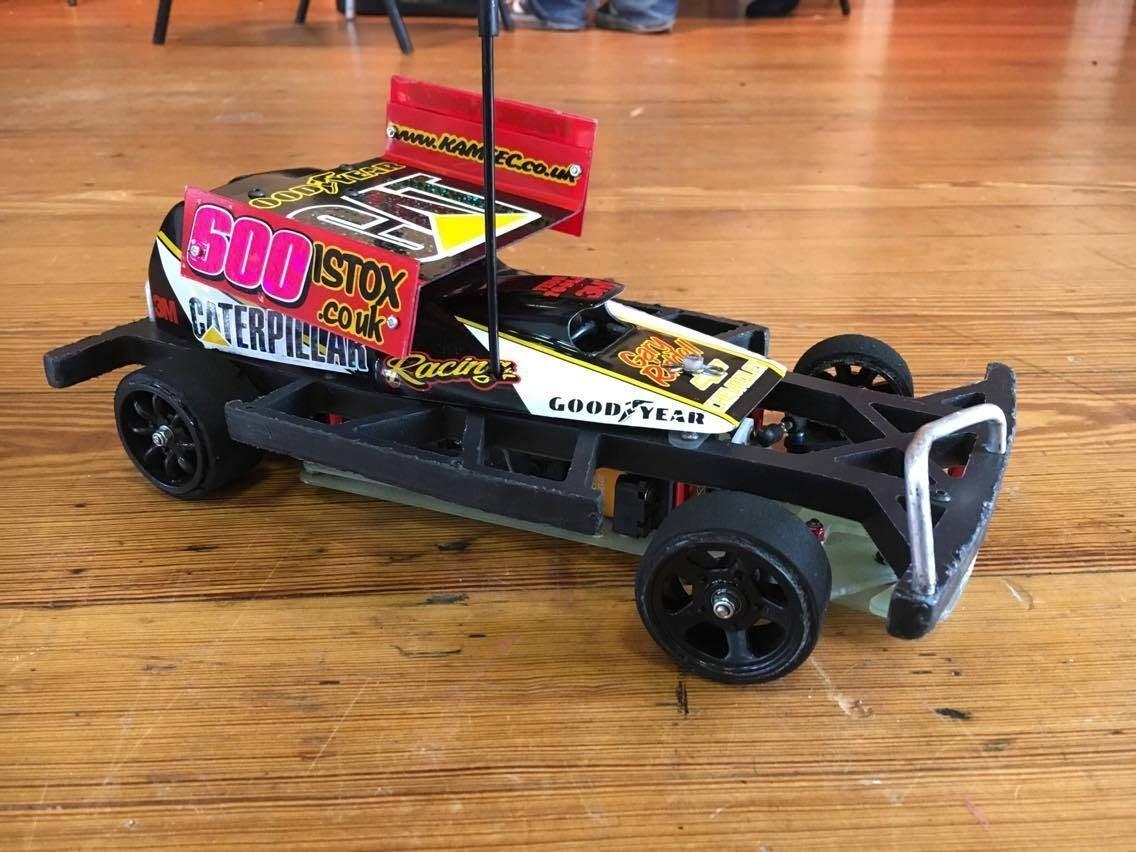 The 2017 World Championship was held by the Model Stock Car Friesland (MSCF) club in Marrum, Holland on Sunday 12th November where nearly 50 drivers took part in the race for the gold roof, 18 of which had made the trip over from the UK.
Saturday saw drivers practising and setting their cars up in readiness for Sundays championship meeting. Although the track is relatively small it is also wide and allows for some very fast racing. The carpet used is also different to that commonly used at UK tracks and many drivers found that grip levels were constantly changing throughout practice. The facility at MSCF is superb and Saturday evening comprised of socialising, slot car racing, pool, food & beverages all made possible by our kind hosts who made everyone very welcome. #Racingfamily sums it up perfectly.
Drivers arrived early on Sunday morning, but it was clear that Saturday night had taken its toll. A few bleary eyes were seen, and we had also lost a driver but thankfully he was later found safe and well.
Following drivers briefing the racing commenced and all drivers had 4 qualifying heats with the best 3 to count but only the top 24 would progress to the quarter finals.
Contact is a big part of stock car racing and the bumpers were being used to good effect to pass other cars. Each race was 5 minutes in duration and in the heats lap scores of 110-115 laps were the highest with average lap times being circa 2.7 seconds. Racing was fast and furious.
The quarter final grids were finalised and Anthony Wyper, Dylan Ashurst, Ben Harding & Brandon Eccles all started on pole position in their respective quarter finals as they were the top 4 qualifying drivers from the heats.
The focus in the heats was obtain as many laps as possible but now it was make or break time as drivers had to finish in the top 3 positions to progress to the Semi-finals.
The 12 drivers to qualify to the Semi-finals were as follows:
Anthony Wyper #30 UK
Marco Schouten #318 NL
Dylan Ashurst #55 UK
Rob Teuke #14 UK
Ben Harding #471 UK
Graham Eccles #530 UK
Brandon Eccles #531 UK
Mark Craig #141 UK
Owen Bates #515 UK
James Eccles #532 UK
Maikel Rutten #144 NL
Rob Whalley #919 UK

The UK drivers were proving to be a force to be reckoned with and Dutch hopes now fell on Maikel Rutten and Marco Schouten.
The 6 drivers to qualify to the World Final were as follows:
Anthony Wyper #30 UK
Dylan Ashurst #55 UK
Graham Eccles #530 UK
Brandon Eccles #531 UK
Owen Bates #515 UK
Rob Teuke #14 UK

Shock result of the semis was three times 1/12th World Champion Ben Harding who failed to progress to the final and the last 2 Dutch drivers who also didn’t make it to the main event.
The final grid comprised of 6 UK BRCA registered drivers with 3 being seniors and 3 juniors. The future looks very bright for this section with the talent the juniors are showing against the more experienced drivers.

Prior to the World Final a Junior World final race was held with Urmston UK drivers Dylan Ashurst and James Eccles up against 4 Dutch Juniors.

The race proved to be fast and brutal at times but there could only be one winner. Credit to all the juniors who put up a good battle to win but after a great start there was no catching the eventual winner. Dylan Ashurst took the honours to become 2017 Junior World Champion with a controlled drive and very well-deserved win.
Congratulations Dylan

So lastly the main event – The 2017 1/12 F1 Stock Car World Final
Owen Bates and Rob Teuke representing the Rugby club and Anthony Wyper, Dylan Ashurst, Brandon Eccles & Graham Eccles representing the Urmston club.
Prior to the race there was a short speech to thank the people who made the weekend such a success and gifts were presented. In true stock car style, ‘Fanfare for the common man’ was then played to add to the build-up for the main race.
As the drivers did a few warm up laps it became apparent that the track had changed again and a few commented on a lack of grip. Certainly, more people were present to watch the final so maybe this had increased the temperature in the room or was it that people had walked on the track after the junior race. Whatever the reason it was the same for all finalists.
The race started with a few position changes as the drivers adapted to the track to find the fastest line around the track. Anthony Wyper, Brandon Eccles & Graham Eccles had all come 2nd before in the World final so were hoping to better that in 2017. Anthony was probably the favourite to win and while everyone watched him, Rob Teuke was circulating at a very fast speed clocking up the laps. After a very close race it was Rob Teuke who achieved most laps with a superb drive to become 2017 World Champion.
Congratulations Rob

Many thanks to everyone at MSCF for a superb and well-run race weekend.
Graham Eccles
BRCA 1/12 F1 Stock Car PRO