Sunday saw the start of the Traction race series at Swifts Raceway. The revamped Autumn Shootout was back to sort the winners from the wannabes. Like last year the championship had attracted some of the UK's top drivers such as National champions Adam Catchpole, Darren Newton and Andy Murray. Also joining the field was newly crowned F1 Clubman champion Luke Lee. Once again the pit lane was full of activity and great banter before the track wars begun. The track layout seem to favor the GT10's and F1 classes with a lot of fast flowing corners. It was going to make it a very close meeting for the smaller GT12's.

The earlier stages of qualifying saw Luke Lee quickly settle into indoor racing as he shot to the top of the F1 time sheets. James Wright just missed out on taking pole by 0.17 while Lee Carter made an impress debut in 3rd. In GT10 Kevin Creaser was fastest and closely shadowed by Mark Deacon and Lee Stokes. As expected the main battle in GT12 was between National Pro's Catchpole and Murray with Catchpole taking the initial advantage. By the end of qualifying it was a dead heat between them. Murray claiming pole by 0.01 of a second! The pair also shared identical fastest lap times to add to the excitement. Kieran Manders was the only other racer who managed to achieve 30 laps out of the Swifts Track.

In the interval before the finals, the racers were treated to a raffle with a difference. 4 racers were pulled out of a hat to compete in our super lap challenge. The racers had one lap in the Swifts Super lap car to set the best time. The winner got the first pick of the prizes which had been provided by Schumacher Racing. Mark Christopher, Mark Burgess, Lee Carter and Martin Harris were the lucky racers with Burgess and Carter receiving 0.5 second handicaps. It wasn't enough however as they just managed to beat the other two, but both with identical 16.93 second lap times. With the whole centre now watching the pair, they were sent out again for a deciding lap. Carter was first up and improved on his time with a 16.64. Burgess tried hard to beat the time but over cooked one of the last few corners leaving Carter with the bragging rights. The challenge was a big success and we'll definitely be running it again at Round 2. 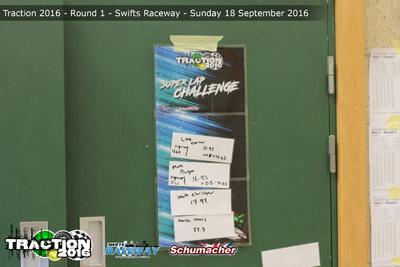 After the fun break it was back to business. The Formula 1 final was first with a full grid of 10 cars. Lee and Wright made a clean start while a few incidents occurred in the midfield. It allowed last years GT10 champion David Underwood to leap from 7th to 3rd and start pressuring Wright. The trio stayed in formation pressuring each other for most of the race. There was only an incident with a back marker in the closing few laps which nearly mixed up the order, but it was not enough to stop Lee from claiming the round 1 victory.

In GT10 it was a lights to flag victory for Creaser, Deacon had a bad start and was pushed down the order. Adrian Parkes emerged from a clean start in second but was soon caught up by a recovering Deacon. Parkes then went on the defensive holding him back to the point when the pair crashed on lap six. Parkes was again lucky from the incident which then bunched up the field. The battle continued for a further 6 laps until Deacon got a perfect run through the corkscrew to sweep past Parkes into second. Parkes luck had then truly run out as he was caught and passed on the same corner by Stokes. The race concluded shortly after that with Creaser taking the opening GT10 win.

After a great GT12 B final the event was ready for the feature race and anticipated battle between Catchpole and Murray. The race set off with a generally clean start, it was the second lap which saw Barry Lynch make a mistake into turn two forcing him to retire with steering damage. Shortly after that came an even bigger shock as Catchpoles car appear to suffer a failure coming out of the corkscrew. The car just didn't seem to turn and hit the track markers hard. After a quick inspection by the National champ he returned his new Zen RXGT back to the track to try and work out what the problem was. As Murray stretched out a massive lead the battle was on for second with Manders, Craig Nutting and Ripley all matching each other's pace. Ripley was the one to force a change but didn't quite time his pass right on Nutting and was order to return the place to Nutting. This allowed Nutting some breathing room where he appeared to have his race back under control. However there were eight other races going on which he got tangled up with, allowing Ripley to get past. After that there was no more position changes, which saw Murray collect the elusive win he tried so hard for last year. Manders and Ripley completed the podium.

So that was the start of what promises to be another fantastic race series. The opening meeting couldn’t have gone any better with some amazing feedback from the drivers (even some that had nightmare finals). The Schumacher backed super lap challenge was a great highlight to the event that was completed with some more memorable finals. The thank you's start with the Swifts Raceway team for more hard work on another faultless meeting, Schumacher Racing for their support and prizes, Darren Newton for commentary and refereeing the finals, and of course the faithful racers for some great entertainment and funny banter. The series will continue with more on track fireworks in a months' time, don't forget to get yourself booked in on Swifts Website.