For round 3 of the 4WD regional series we were hosted by Coventry Model Car Club. This was our first visit to their new venue, situated just off junction 1 of the M6.

The track surface is astroturf, with some well profiled features. Speaking to a selection of drivers they were happy to see the club had used sensible sized track markings. To quote Mike Elliott today's layout featured "an abundance of hairpins and straights". The purpose built rostrum provides great visibility of the whole track.
The track has been designed so that the only fixed feature is the straight, meaning multiple layout options are available.

Aside from the track the club have put considerable effort into supplying a toilet block, which is much appreciated by both male and female visitors.
As the weather was dry the preferred tyre choice was Schumacher yellow mini spikes.

Qualifying
Tom Yardy TQ'd all rounds of qualifying with his Schumacher K2, consistently followed by Paul Robinson in second with his Durango DEX410 V5.
In round 1 Tom and Paul were followed by Keith Robertson, running a Charisma 4XS, Tony Bishop running a Yokomo YZ4 and under 16 Ben Pugh with his Kyosho ZX6. 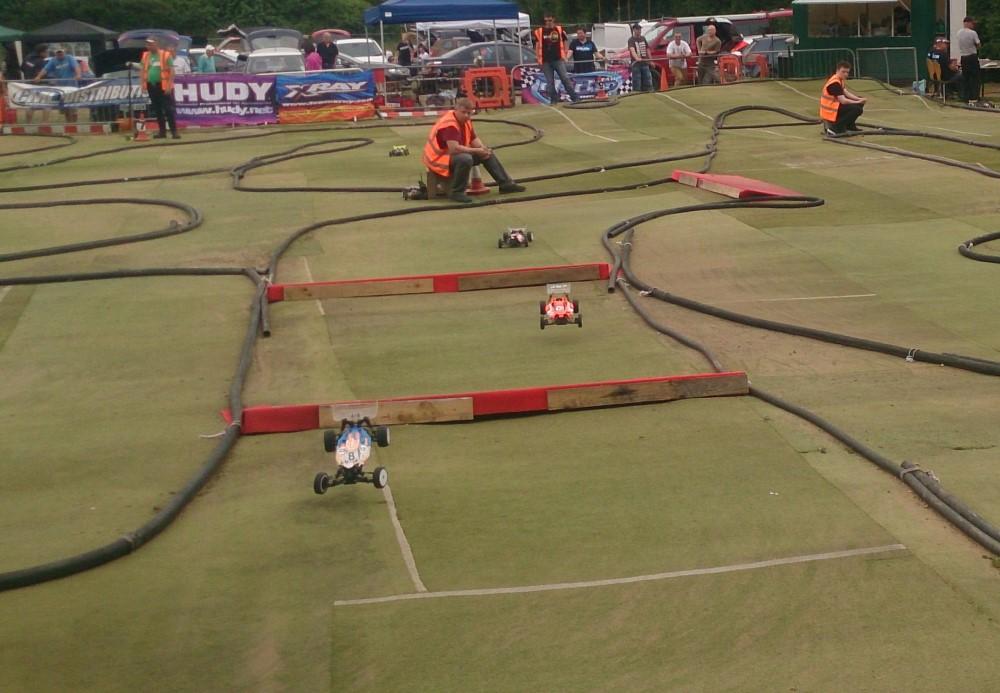 The remaining round scores were as follows:

With a special mention to our juniors, Under 16's Ben Pugh and Felix De Hamel qualified in A final. Under 13's Tommy and Jamie Hall qualified 13th and 23rd respectively.

Tom Yardy’s Schumacher K2, Paul Robinsons Durango DEX410 V5, Andy Reeves Losi
Finals
A final Leg one
After opting for new boots for leg one Tom Yardy's tyre came off during his warm up lap. This made it a challenging leg, and following being over taken by Paul Robinson he managed to snatch victory on the last lap. Kit Jones took 3rd, followed by Mat Dodd, Keith Robertson, Tony Bishop, Andrew Jones, Domm Nunn, Felix De Hamel and Ben Pugh.

A big thank you to Coventry model car club for hosting a successful round of the series.
And thanks to Kay for keeping everyone fed and watered

As this is my first race report I asked the pits what they would like to see included. Jason Potter requested naked ladies with large chests...

But as that's not really relevant if anyone has any suggestions or requests of what they would like to see please let me know.
I'd also like to wish Phill Robinson a speedy recovery; we're looking forward to having you back in the pits soon.