Eden Park Raceway
The Eden Park Raceway crew somehow make their track one of the most presentable on the calendar.  Every year the track and the surroundings are immaculately manicured. This year they had some new Astro laid on the straightway and on the famous raceway banking which is normally tarmac. Saving the racers tyres I wonder.   An Orange/Terracotta colour that I personally like.  With personnel everywhere in Orange and always at hand to cater to everyone’s needs and a race track that is demanding to say the least, this was surely going to be a great event.

Everything immaculate – Banners all around – Feeling like a proper racing arena.

2wd Event – Saturday
Weather
The weather was dry, sunny even but the forecast wasn’t so bright ahead!

Qualifying rounds
Normally when we get to National events we see the top drivers split into to the top 3 heats and normally by
Championship order. This time round we saw most of them in the top heat together. Somehow this seems exciting.
In round 1 we saw Tom Cockerill take up the quest to take round 1 TQ with Neil and Lee in hot pursuit. They swapped
places back and forth and it was Neil Cragg that stole it at the end by some 0.55 of a sec. 2nd was Tom Cockerill and 3rd
was Lee Martin. Randomly selected others were the likes of Chris Doughty in 5th, Kyle Moon in 10th, Chris Lake in 13th,
Chris Delves in 15th.
Round 2 was upon us and we were to be treated to some great qualifying. A certain V40 driver popped up to go fastest
of all in the 2nd round and by doing so, he put himself right in the mix of it all. Ellis Stafford that has historically done well at EPR and of recent times set the fastest time of the day. Neil Cragg 2nd, Lee Martin 3rd and selected others were, Kyle Moon with 4th, Chris Lake 8th, Kit Jones 9th, David Orbell 16th.
Round 3 and Nathan Ralls set a great time and as the weather was coming in fast, he certainly did it at the right time. With some drizzling rain for the top heats Nathan took TQ for the round and with already a 9th scoring it was unlikely not to make the A Final. The weather certainly played its part as Neil Cragg had a 57th in round and Lee Martin a 66th. Selected others, David Orbell 2nd in round, Luke Holdsworth 3rd, Paul Crompton 5th. Suddenly all changed from a dry event to a wet event.
Round 4 and everyone on wet tyres. It was Lee Martin that took the round with a controlled run and with that he would line up 3rd on the grid. A significant run was to come by Ellis Stafford in at 2nd and with that he took the pole position for the main event. Neil Cragg could only manage 6th but lined up 2nd for the A Final. Nathan Ralls improved with a 7th in round to line up 4th. Other randomly selected scores were, Danny McGee 4th in round, Chris Delves 9th, Richard Lowe 12th, myself in at 13th, Kev Lee 18th, John Spencer 24th. A special mention for Kyle Moon as he made his first ever National A Final, Well done Kyle! 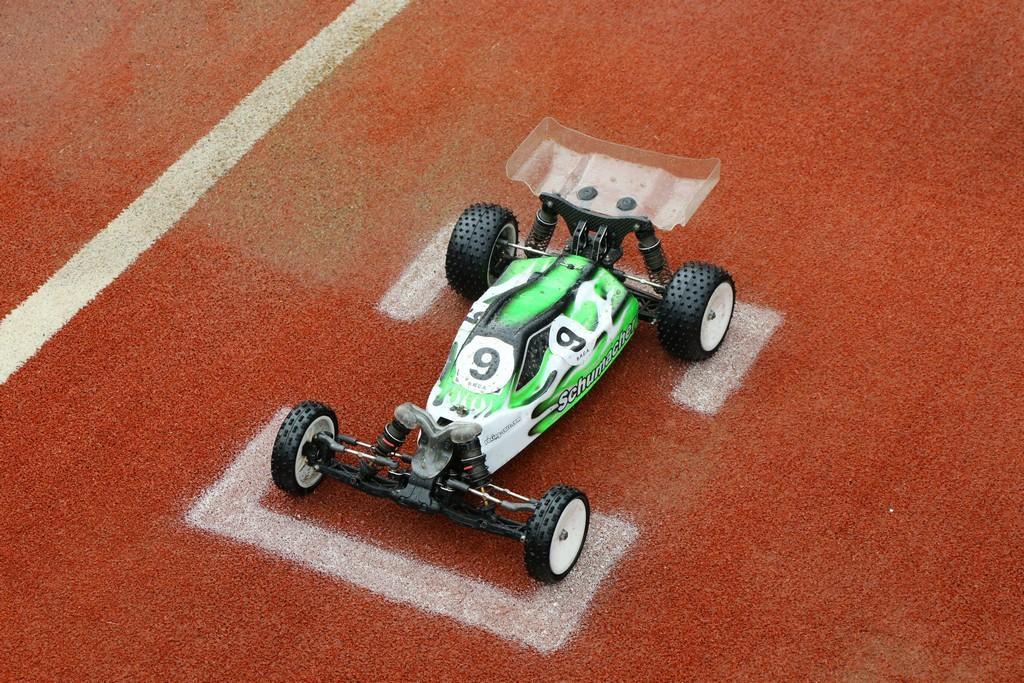 Leg 1 A Main Whenever the weather is wet and tracks get slippery there normally is some good racing. From the start tone everyone got off clean but Neil Cragg successfully made a move for the lead on Ellis. He was never to look back and somehow looked like he gained some drive from somewhere. New tyres maybe!! Ellis in 2nd some near 4 secs back and Lee Martin just behind for 3rd. Tom Cockerill in 4th, Danny 5th, Craig in 6th, Nathan 7th, Chris 9th and Kyle in 10th.

Leg 2 A Main So leg 2 under way and again everyone got away nicely. Ellis from pole knew that he has to stay clean and he has to defend from any attacks from the others to have any chance to take the battle to a 3rd leg and to have a chance of victory here at EPR. Neil sat there in 2nd following Ellis waiting for any sign of weakness and he was ready to pounce. Lee Martin also sat there behind Neil again waiting for any type of small error to get in the mix. Close racing is really an understatement as these 3 guys were playing a game of chess rather than racing radio control cars! Neil had a couple of goes at Ellis in the later stages but wasn’t successful. Ellis took the 2nd leg win, Neil 2nd, Lee 3rd. Nathan a couple of sec behind in 4th.

Leg 3 A main. So this was the shake down between Ellis and Neil. Both with a win each and both with a 2nd each. Neil had the fastest win time so he was in the prime spot if anyone else won this last 3rd leg. Rain eased off a little as if the weather knew this had to be a spectacle of racing! Off they went on the buzzer and everyone again had a great start. Neil looked early this time and tried to overtake Ellis and break away. Ellis wouldn’t have any of it though and in fact tried to go faster and faster from the front to break them and gain a comfortable gap. Neil Cragg and Lee Martin were in hot pursuit the whole race and tried at various time to attack Ellis for the lead. Ellis kept his head and drove his Losi 22 over the line to take the win and the meeting. Neil in 2nd, Lee in 3rd. There was just 3.8 secs between the 3 of them. A super race!

Conclusion exciting racing in dry and wet conditions. The EPR crew have done a fabulous job in all conditions. The track held up very well and we all had a great time. Football live that evening at the venue too.

The EPR crew left the same track down for 4wd but we were to attack it the other way round. Sounds easy but I assure you it’s not 
Weather A little rain over night but the weather forecast was not looking good. It was decided to get things moving a lot quicker than normal National mornings so we at least got some rounds of qualification in. The 2 practice sessions were still run but a lot shorter than normal just so drivers can get the chance to change tyres if they wanted to try anything different….. The drivers briefing was done on the PA system and we all got ready to race very very quickly indeed….Personally I started to think, why don’t we hassle on in the mornings and get this done anyway!! Room for thought I think.

As we started to get round 1 under way, the rain came. Not heavy but it was raining. Would the track hold out I kept on thinking. Personally I was sort of happy as this meant it was wet for everyone in the round rather than raining half way through and we then see freak scores and so on. Neil Cragg straight to the top with Ellis 2nd and Chris Doughty in at the 3rd spot. In a bazaar way though this doesn’t mean as much as the 2nd round scores. In these conditions and circumstances, if the meeting was to be called, then 2 rounds would have to be run and completed. If a person TQ’ed the 2nd round with a faster time than round 1, then they TQ and win the event subject to it been cancelled after 2 rounds that is.

Hope for us all, especially as I picked up an unglued pair of tyres to try and qualify round 1 with. I don’t mind admitting that I am losing it……lol

Round 2 was quickly upon us as we got reduced to only 9 heats. Lee Martin stepped up and took round 2 with a quicker time than Neil from the 1st round. Danny McGee was in at 2nd, Neil in at 3rd , Tom Yardy nicely in at 4th and Christ Doughty in at 5th. I thought we were going to call it off after 2 rounds but the EPR crew swept the track and off we went into round 3.

Round 3 Lee Martin was super quick in these conditions and he yet again took another TQ with an even faster time. Ellis Stafford in 2nd, Tom Yardy in 3rd, with Chris Doughty 4th and Ben Jemison in at the 5th spot. Then it was announced that the off-road committee would have a meeting and a delay of 10 minutes was called. Unfortunately a couple of people had slipped while trying to marshal and of course this is not rocket science that this is not good. Although the track was good for the buggies, the conditions and the various forecasts were all pointing to the direction of calling it a day. That is what was done and in my personal opinion the right decision. Lee Martin of course is announced as the winner of the event as the TQ man after 3 rounds, Neil Cragg came 2ndand Ellis Stafford in at 3rd. 4th was Tom Yardy, 5th was Chris Doughty, 6th was Craig Collinson, 7th was Danny McGee, 8th was Tom Cockerill, 9th was Kyle Moon making it a double for him and 10th was Tony Bishop. A mention for Tony Bishop that finished 10th and making another A final. I say making another but it’s been a long 13 year gap from the last time he made a National A Final. Well done Tony!

Apologies from myself With the weather coming down, I never had an opportunity to take photos of the 4wd event. I apologise for this. Full results will be on-line soon after they are all verified.

Conclusions As usual, smoothly run by the BRCA and all the organisers at EPR. The track was lovely as everything else was. Personally I feel for you with the weather but I also tell myself we are lucky to have a track like yours that can cope with it all and that’s without a mention to the great crew you have at the club.