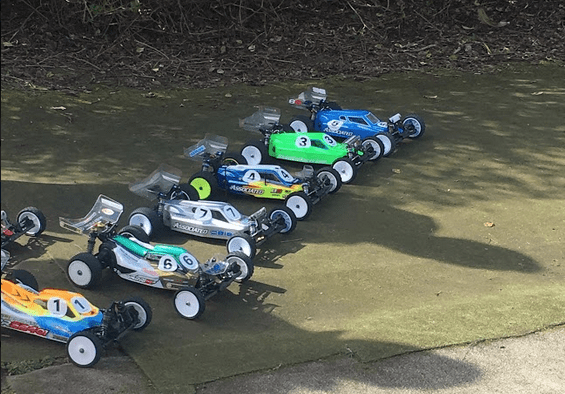 The first meeting of the 2017 regional series was hosted by Kidderminster Model Car Club. With the weather forecast predicting sunshine it was the perfect start to the season.

Since last years series there have been a couple of changes to the meeting format. Drivers briefing now takes place before practice, and drivers are required to marshal the practice heats.

There has also been a change to the way marshals switch between heats. Marshals are now required to stay on their positions until the drivers in the following heat complete their warm up laps. When 30 seconds is called all cars must be on the line, and marshals are free to switch. This means that no cars are circulating whilst people are in the track.

The track layout chosen was last used in 2006, for a national.

Every racers nightmare, dropping something small onto grass.

With a consistently dry track throughout qualifying we saw a pretty consistent top 10 in all four rounds. The new nominated tyre of Schumacher Darts was the favourite amongst the drivers. Even when worn the tyres provided plenty of grip.

Individual round scores were as follows.

This year the region will also trial running a 2WD guest heat at 4WD meetings.

After four rounds of qualifying the top 10 was as follows:

A final Leg one

The overall results were as follows:

A big thank you to the members of Kidderminster Model Car Club, to Stuart Whyman for running the meeting, and to Kay for feeding everyone.