The Club and Track

Stotfold Model Car Club is ideally situated geographically for many racers to get to. The club often holds regional events for both the Mid-South and recently the East of England. This is the 7th year Stotfold has had a National event. Some changes to their rostrum noticeably new stairs that are much wider and safer that before. The track more or less the same with a much undulated ground of natural features amongst the manmade wall of death. Some interesting positioning of the track hoses to make life more than interesting for the competitors on this last National of the year. 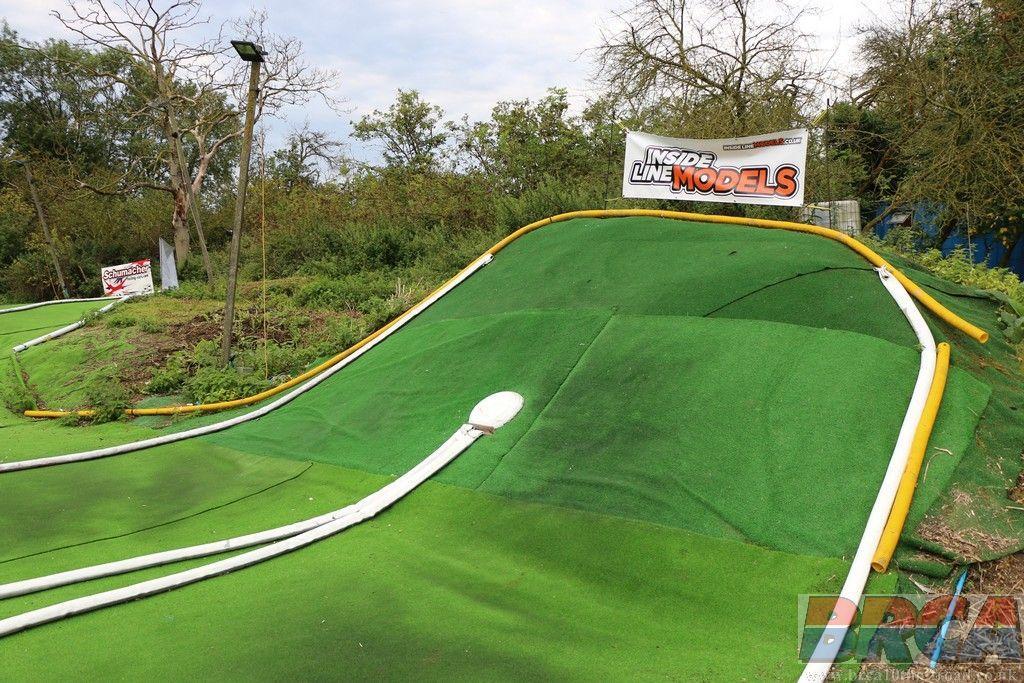 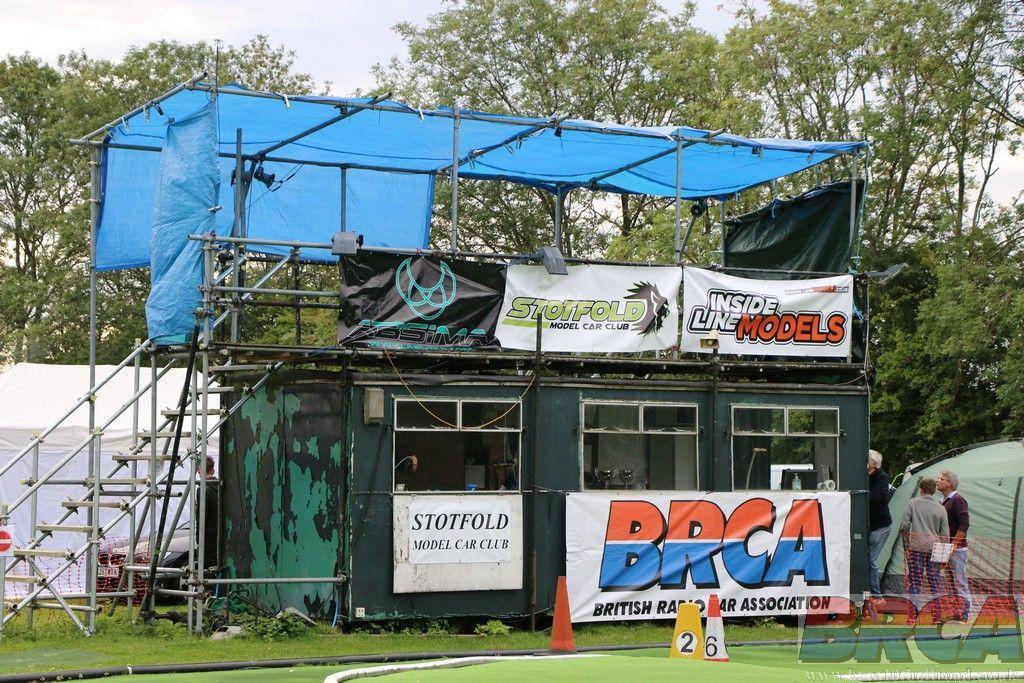 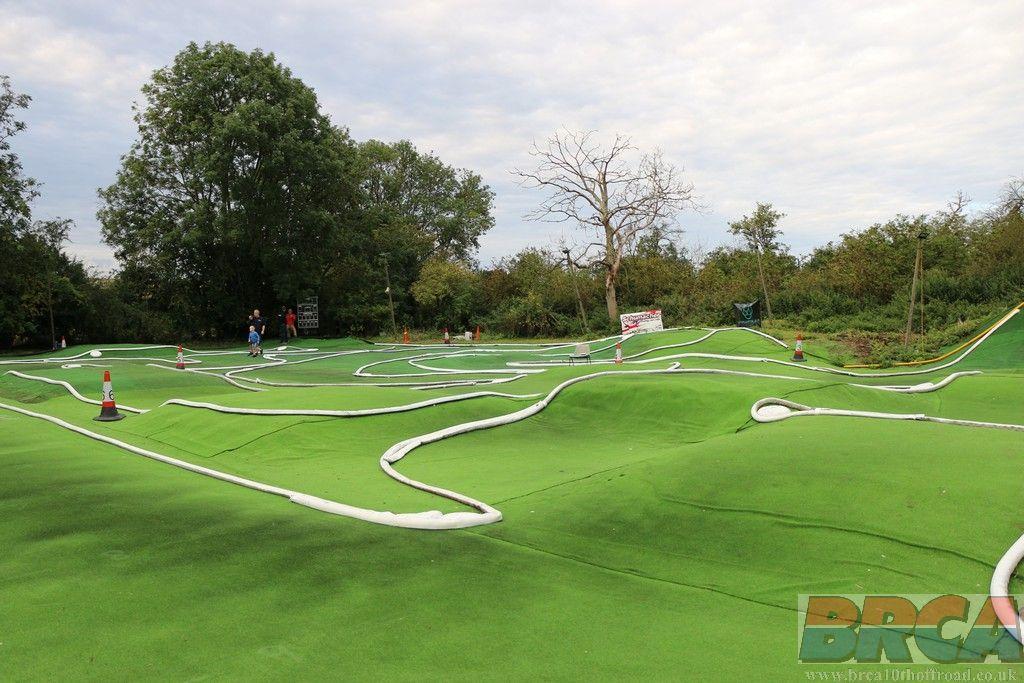 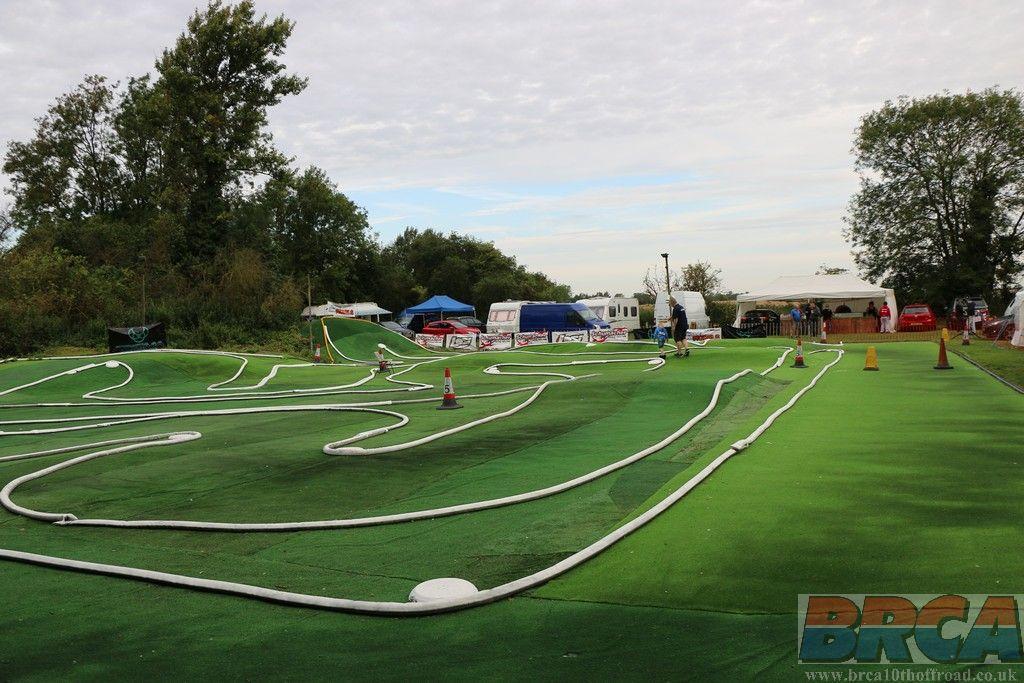 Paul Worsley our chairman always introduces the personnel running the meeting and as always updates everyone to what’s happening in the big world of RC. This was a straight forward drivers meeting with no complications but some nice congratulations of the British drivers that did so well at the recent European Championships Keith Wardle, chairman of Stotfold Buggy Club and BRCA 10th secretary was the race director.

No different on the practice sessions to any other national event but for some strange reason we were doing 3 minutes and 15 seconds. I really don’t know why this is but at least it was an extra lap – LOL All in heat order, 12 heats at this stage.

The weather was certainly looking OK but I have to say there were periods of feeling a little cold. At least it was dry. As usual I try to highlight one or two drivers for each event as its recognised they either go really well at a particular venue or it’s their home track. This time its Kev Lee. Kev has won a National here before and many times on the podium. He didn’t live very far from the track till recently and like I commentated on the day, rumour has it he was sleeping here under the Astro turf while spending loads of time practicing – LOL – not really just in case you actually thought he was!! Another would be Lloyd Storey. Another local lad and although Lloyd has had many good results all over the country, here at Stotfold he always looks super-fast. The National 2wd Championship was still up for grabs. Lee Martin and Neil Cragg were set to fight it out for the 2wd title, here at Stotfold. To get the title it looked like Lee Martin had to TQ for the extra point and win the final to get the title off Neil Cragg. Lee started very well setting a pace of 14/316.75 but only just a second in front of his teammate Tom Cockerill in 2nd. 3rd was that Lloyd Storey guy we mentioned earlier and 4th was Tom Yardy that was fighting it out with Cockerill for the 3rd spot of the championship. Kev Lee the rough sleeper was 5th, Danny McGee in at 6th, Simon Moss in at 7th, and David Orbell in at 8th. Ben Jemison drove well for 9th and Richard Taylor past British Champion in at 10th. Note no Neil Cragg in the top ten. Not often we say that. He was just behind Steve Brown in 30th place after not one of his best runs. Not often we say he’s behind Steve Brown either

The weather holding good it was Lee again out in front setting the pace now at 14/315.07 but again it’s the Tom Cockerill machine right on his heals only 0.66 off his pace. Lloyd another 3rd already secures his A Final spot. Tom Yardy another 4th to make round 2 a repeat of round 1. Simon Moss 5th, Richard Taylor 7th, David Orbell another 8th (never made an A Final), Ellis Stafford showing in at 9th with Kev Lee in at 10th

Lee Martin started off like a demon in the 3rd round. He was what I call bang on form and although Neil went with him, Lee was just relentless with his lap times. He set the pace real high on a time that looked impossible to be beat. 14/311.83 was super quick. Neil 2nd but near 4 sces back. Tom Cockerill again right up there in at 3rd. Kev Lee 4th, Tom Yardy 5th, Simon Moss 6th, David Orbell with a 7th to get his hopes up for a first A Final, Danny McGee 8th, Nathan Waters 9th and Elliott Boots in at 10th in the 3rd round.

Well Lee secured the pole position with 3 round wins and now we wanted to see how quickly he can go. With a free run as such, he probably would try something to gain a little more speed (as if he needed it) but there was nothing apparent much different. He took the last round too on another super quick time of 14/312.07. 0.24 off his own fastest time of the day. In at 2nd spot was Lloyd Storey, 3rd was that Tom Cockerill lad that has been doing so well. 4th was Simon Moss, 5th Neil Cragg, 6th Richard Taylor, 7th was Ben Jemison, 8th Nathan Waters, 9th Elliott Boots and 10th was Danny McGee. 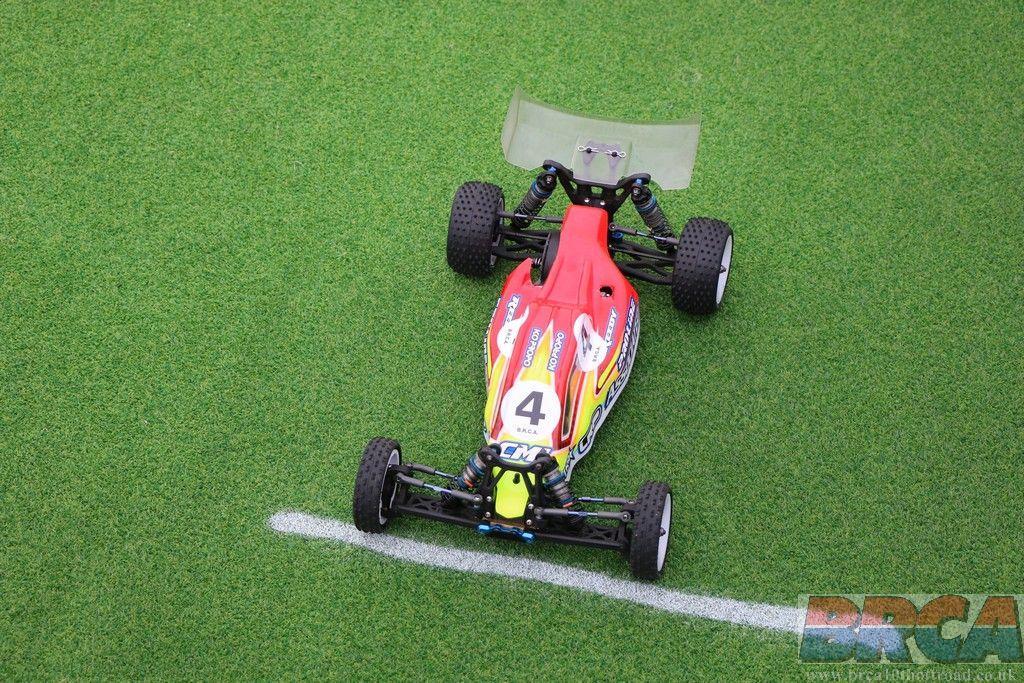 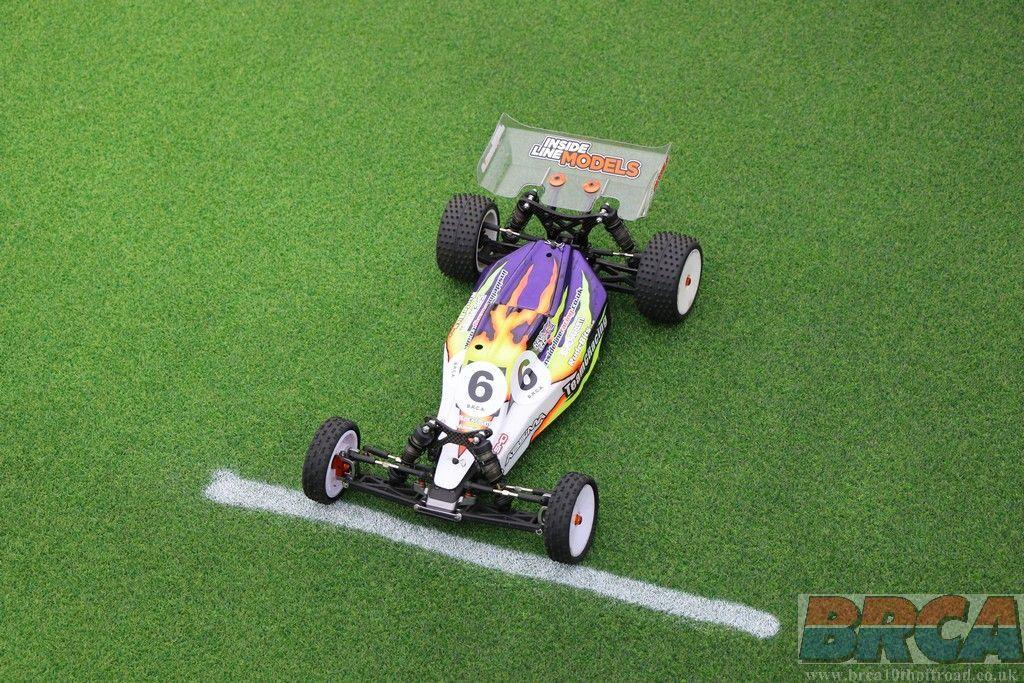 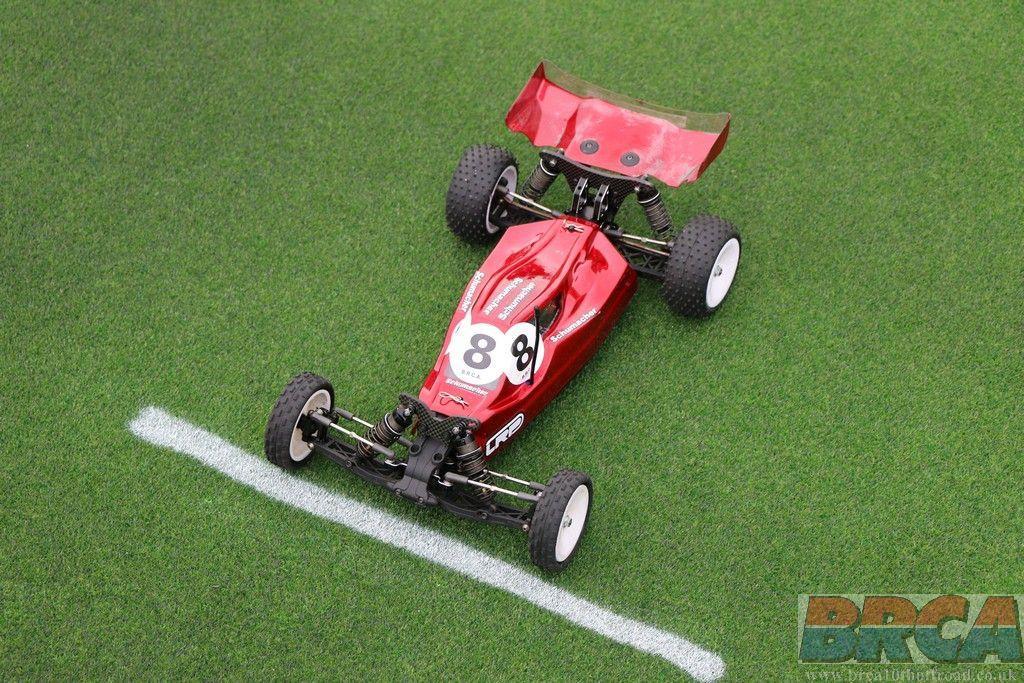 Lee led them off and was under extreme pressure from Neil Cragg that pushed Lee all the way. So much so that when they went over the line it looked like Neil was pushing Lee over the line with no gap between them. Lee took it by 0.08 of a sec to take leg one. 3rd was Cockers, 4th was Tom Yardy, 5th McGee, 6th Storey, 7th Kev Lee, 8th Orbell and 9th and 10th were Taylor and Moss

got under way as usual right on schedule. Lee led them off and there was a buddle of cars that got together just behind him and really that was that. Lee drove the faultless leg to take the leg 2 win and the win of the meeting and of course with the TQ already securing the extra point, the 2wd British Championship title too by a single point. Tom Cockerill came in 2nd, Richard 3rd, Lloyd 4th, Simon 5th, Danny 6th, Tom Y. 7th, David 8th, Kev 9th and Neil 10th.

The weather came in and it was already wet. Everyone tucked away in their gazebos, it wasn’t terribly exciting at this stage. The Stotfold crew changed a few hoses around on the Sunday morning and we had an all new track. It looked a very fast track and for sure it would be slippery too. 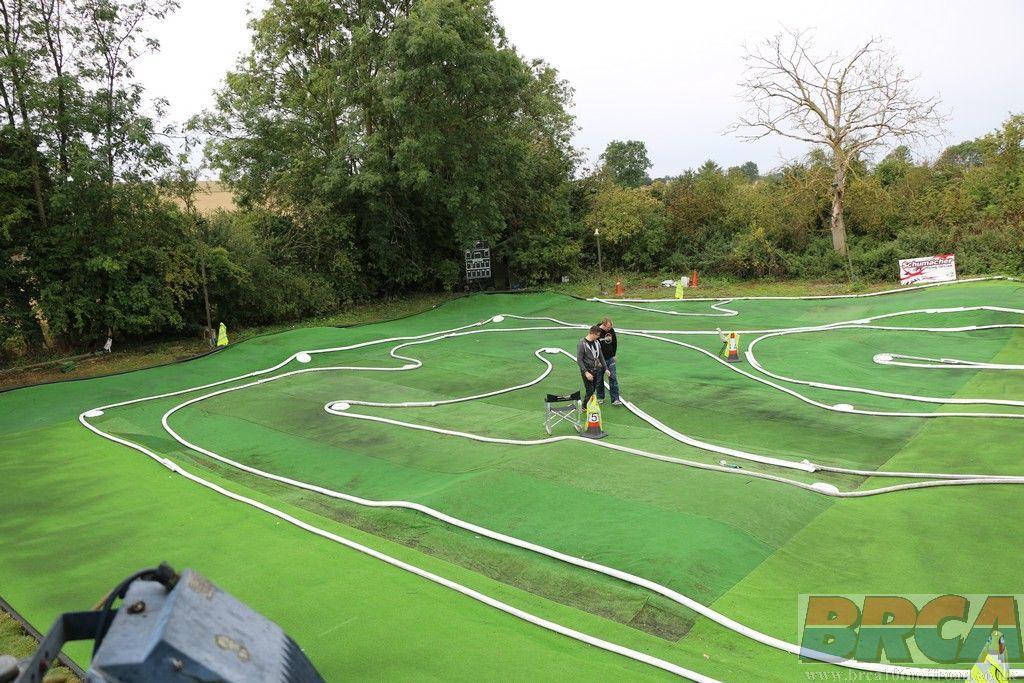 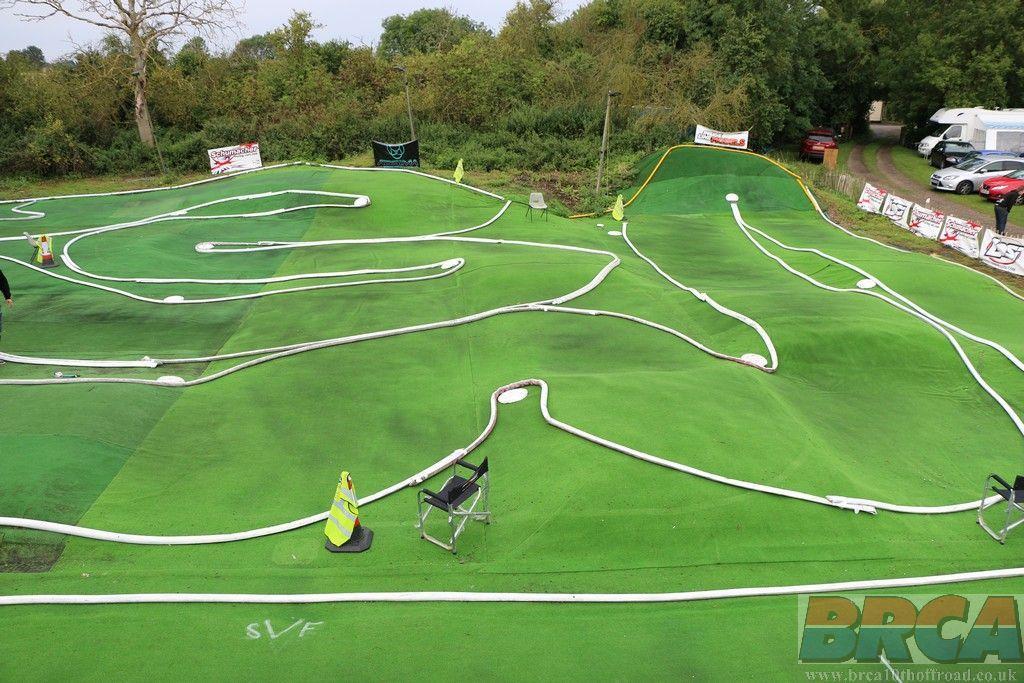 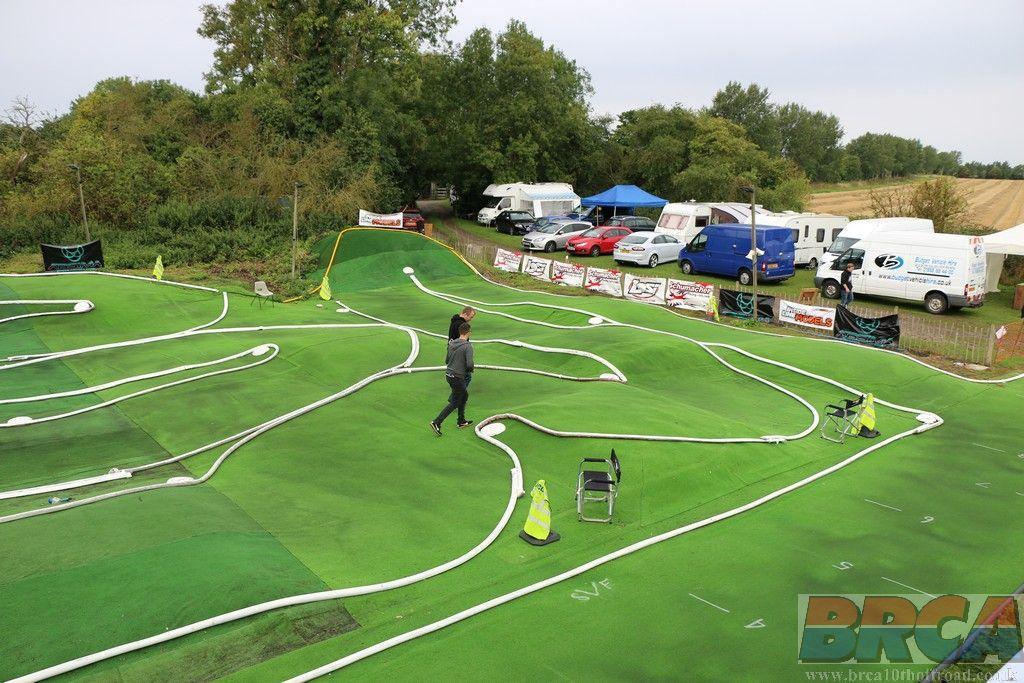 Paul did the drivers briefing – No major announcements.

The weather looked and was rubbish all day – everyone on wet tyres. It was more like ice skating but the same for everyone and with 4wd it would be fun at least!

Here we go again, Lee Martin and Neil Cragg fighting it out. Lee set a quick time of 13/303.77 and Neil was just about 1 sec off that. 6 odd sec back was Simon Moss in 3rd with closely behind, Kev Lee in 4th, Tom Cockerill too, then Nathan Waters in 6th, Ellis Stafford in 7th, John Spencer in 8th, Lloyd Storey 9th and Danny McGee 10th

Lee Martin just doesn’t know how to come 2nd. He went even quicker as the track dried out a little to post the only 14 lapper of the round. 14/321.73. Neil Cragg over 4 secs back in 2nd, Tom Cockerill 3rd, Lloyd Storey 4th, Simon Moss 5th, Danny McGee 6th, Tom Yardy 7th, Kev Lee 8th, Ellis Stafford 9th and Nathan Ralls 10th

Ellis Stafford set a great time of 13/300.01, doesn’t get much closer than that for a 14 lapper. Lee though again relentless put in another 14 lap run to take the round. Tom Cockerill in 3rd a fraction off Ellis, Richard Taylor 4th, Connor Cocker a great run to take 5th, Kit Jones 6th, Kev Lee 7th, Simon Moss 8th, Craig Collinson 9th and Nathan Waters in at 10th in the 3rd round

Could it be possible that a person could win all the qualification rounds at a National weekend. If your Lee Martin then yes it is. Lee again top the sheet in round 4 on a slower track after some light rain. Simon Moss 2nd, Adam Perei 3rd, Kev Lee 4th, Cockers 5th, Nathan Waters 6th, Phil Sleigh in at 7th, Paul Crompton 8th, Chris Moody 9th and Paul Robinson 10th. 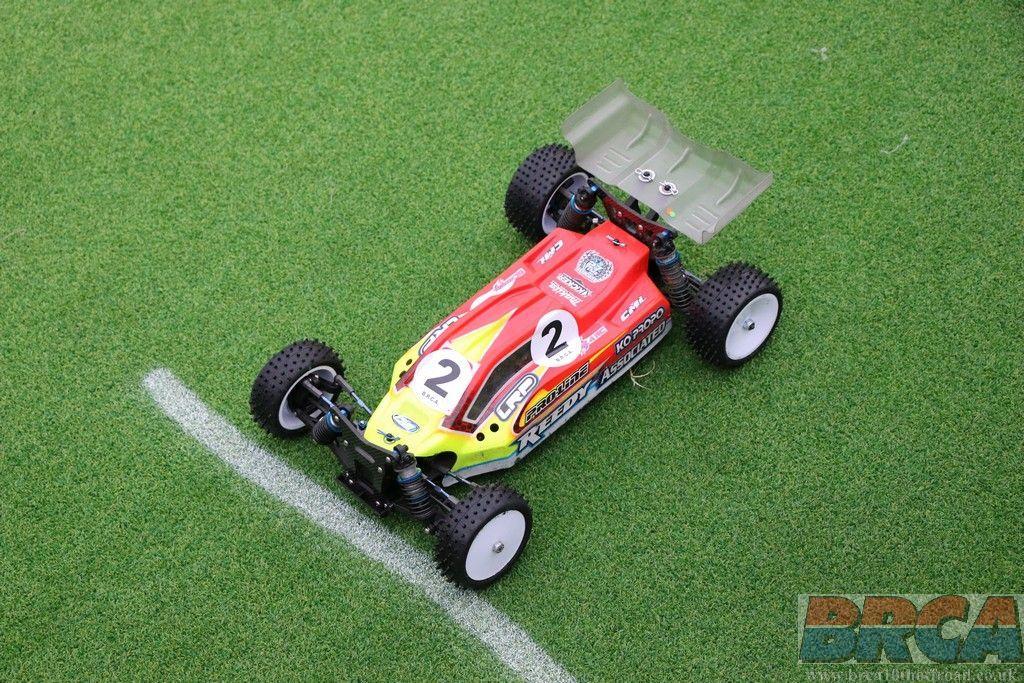 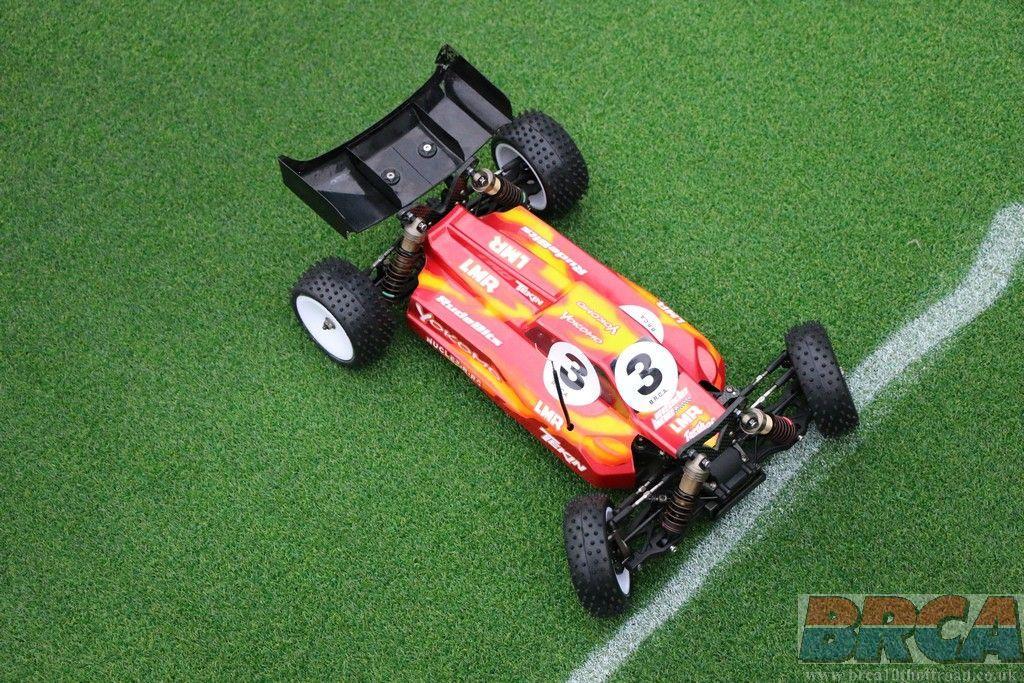 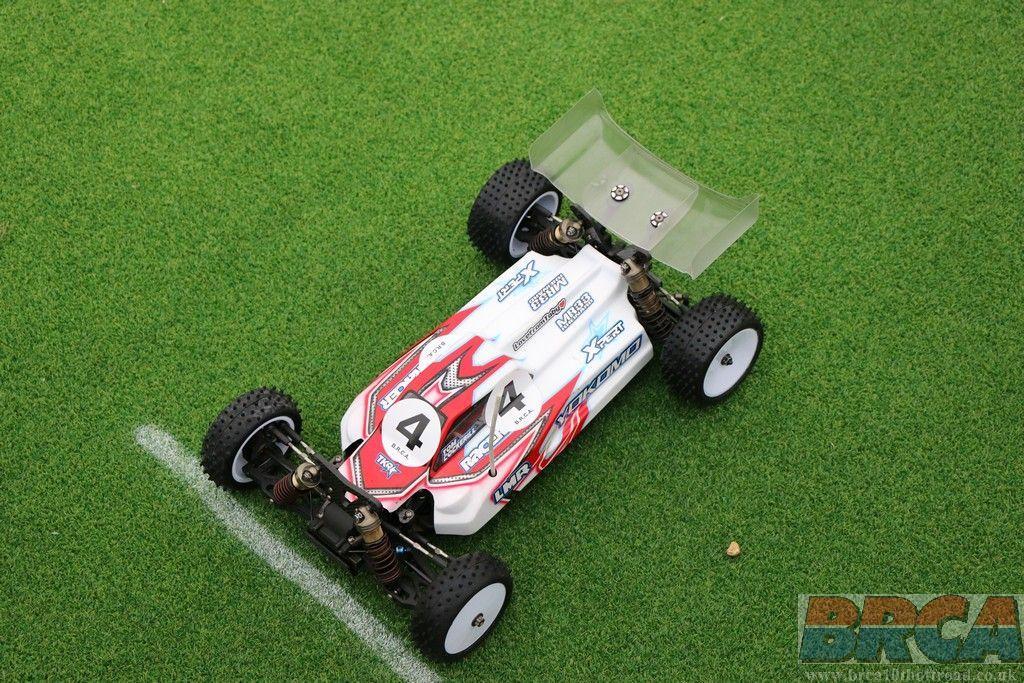 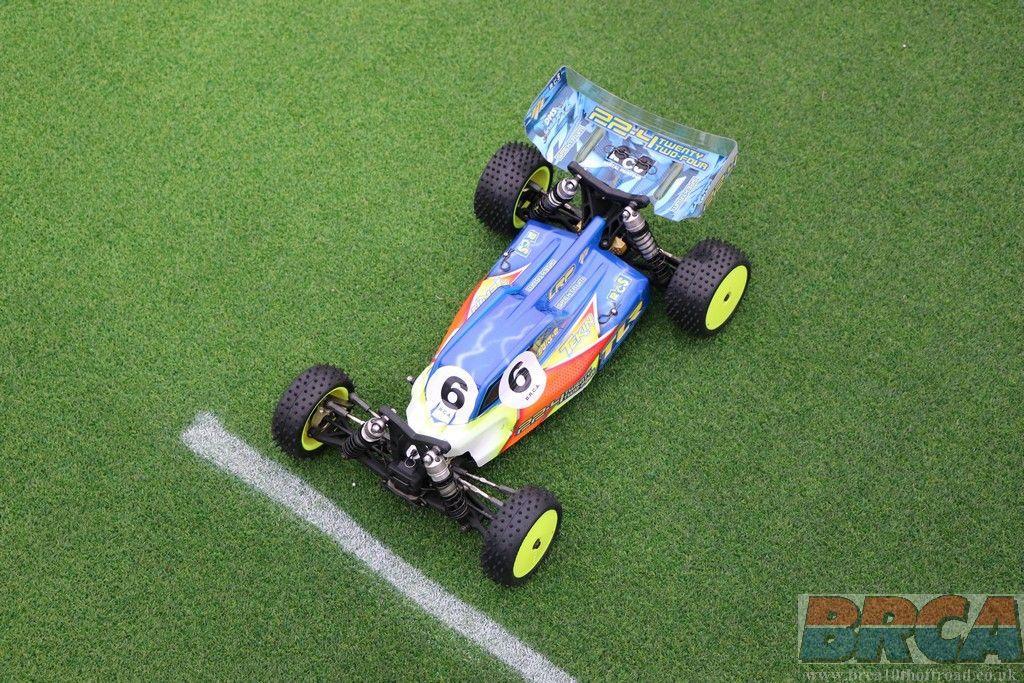 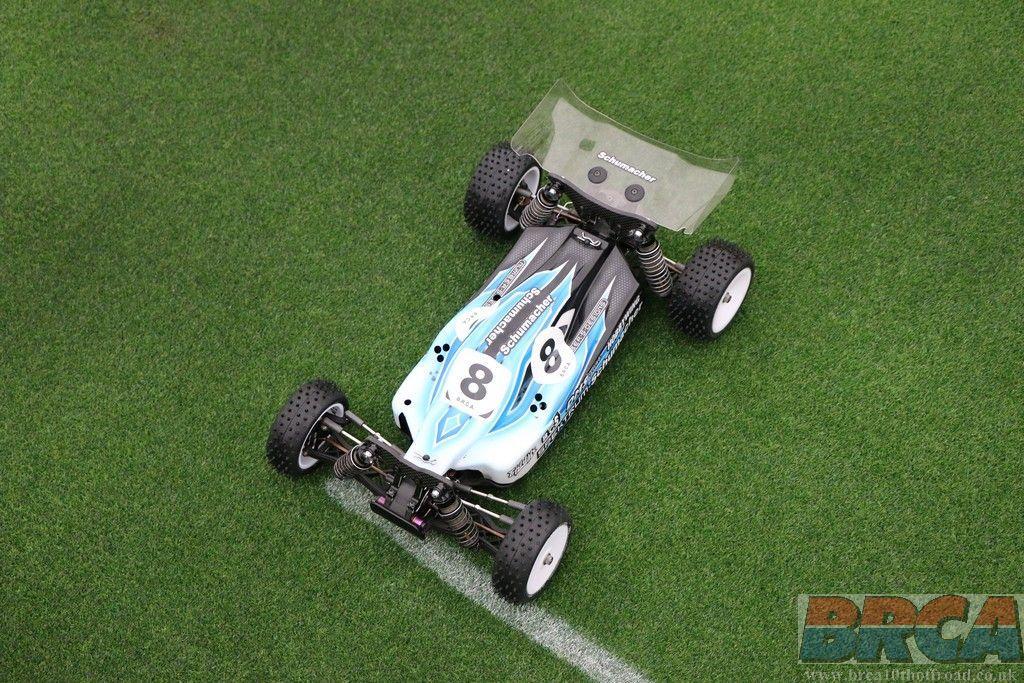 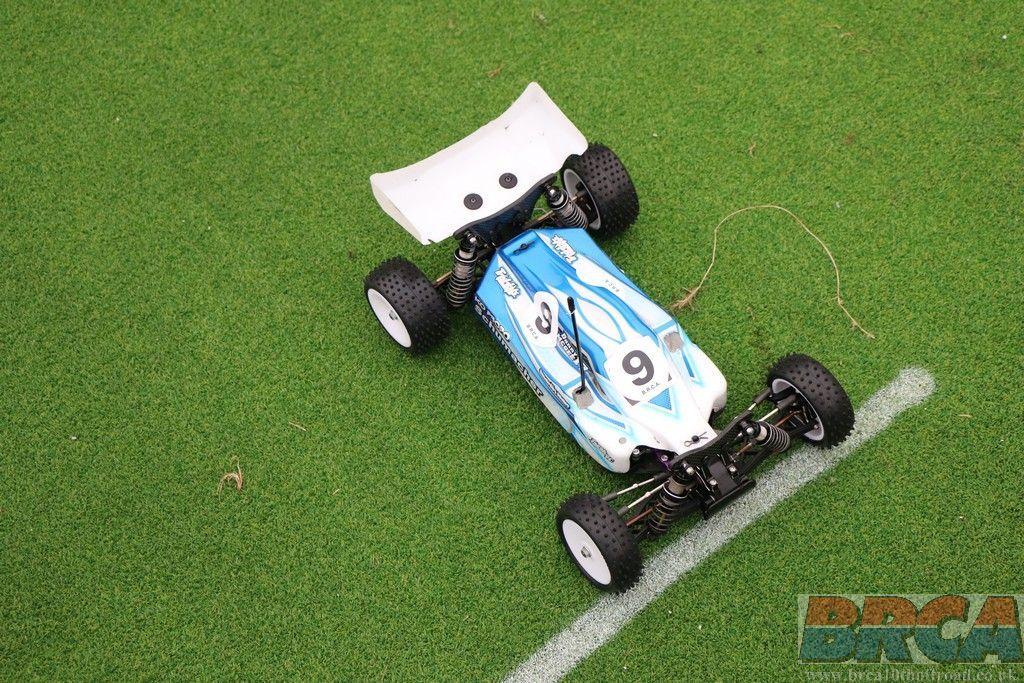 Lee from pole decided he was going to go off in the distance and that is what he did. Simon Moss had a great battle with Tom Cockerill, Kev Lee and Danny McGee. Si took 2nd from Tom 3rd, Kev 4th, Danny 5th. Just behind them Nathan in 6th, Tom Yardy 7th, Neil Cragg 8th , Lloyd Storey 9th and Ellis Stafford 10th.

Leg 2 was a great race too. Lee led them off again, Neil knew he couldn’t let him go, he also knew that he needed to take this leg off Lee or it’s all over for the meeting win. These two guys had a great race. Neil put Lee under a load of pressure but if there is anyone in the world that knows how to absorb that, its Lee Martin. You guessed it, Lee hanged on and took the win and the meeting. Neil 2nd, Simon Moss 3rd , Cockers 4th, Kev 5th, Ellis 6th, Danny 7th, Tom Y. 8th, Lloyd 9th and Nathan 10th

A master class by Lee Martin. A good event and we can count ourselves a little lucky the weather didn’t turn real bad on the Sunday. F2/Vets/Juniors next and then the F3/4/5s a fortnight later.