Round 5 of the Welsh regional series kicked off windy and overcast, but soon warmed up for practice. The COBRA club had laid out a large track at their Marshfield venue which kept everyone guessing as the grass kept building the grip up over the first few rounds.

Craig Harris was soon setting the pace in 4wd with Spencer Farley, Chris Mills and Liam Toole battling away behind him. In 2wd Ben Young made a return in style to TQ the first 3 rounds (until a gearbox problem stopped his clean sweep in round 4). Rob West and Dave Jackson had a good battle for 2nd overall with Gav Gallagher also having a good day.  Another excellent turn out of juniors was very encouraging, with them have a great time running together.

Despite the weather trying it’s best to be menacing, it stayed fine all day and whilst the grip levels (after initially getting high) started dropping off as the grass wore down, many contemplated whether new tyres were the right move for their finals.

The finals started with the juniors, who had steadily improved their times as the day went on. At the start everyone made it through the first corner safely with Michael Belsten edging ahead of polesitter Matthew Curtis-Rich for the first lap, until a tumble on the 2nd lap allowed Matthew to retake the lead, a position he held until the end. Will Owen sneaked past Michael on the last lap for 2nd place with only 2 seconds between their Associated B44s. Ewan Mulcahy finished 4th ahead of Brogan Gibbons, James Harris and Ellie Gallagher. For some of the juniors it was their first taste of a regional, but all enjoyed themselves with behaviour and attitudes that some of the more experienced drivers would do well to emulate.

Onto the B final 2WD and poleman Owen Richards led from the start to finish with 2nd place Peter Mulcahy only a few seconds behind him. Alex Luke came in 3rd ahead of Dave Clutterbuck, Matthew Jones, Ian Sutcliffe and Andrew Owen.

The A final 2WD saw a great battle out in front between Ben Young and Rob West. Rob’s tried everything to get his Schumacher Cougar past Ben’s Team C, but in the end Ben converted his pole position into a win, leaving Rob in second. Third and fourth saw an equally tight battle between Dave Jackson’s PR Racing and Gav Gallagher’s Schumacher, with Dave triumphing on his return the an A final! Steve Curtis-Rich’s Schumacher KD pipped the similar car of Craig McDonald leaving Ben’s dad Chris to bring his Team C into 7th. Tim Bullock’s Atomic Carbon CR2 achieved another A final and an 8th position. Pete Belsten was the sole Associated B6D in the A final this time out in 9th and Roy Davies rounded off the race with his Yokomo YZ2.

Moving onto 4wd, the C final saw Chris Morton take the win from Rob Clarke and Ian Sutcliffe. John Morden took 4th with pole man Gary Preston relegated to 5th after the car sadly didn’t make it to the end of the race.

The B final was an eventful race, which saw pole sitter Tom Owen’s Carisma 4XS knocked down the order early on. Dave Clutterbuck (in his 2nd B final of the day) took the win from Nathan Notley with Andrew Jones in 3rd. A hectic 2nd half of the race resulted in Tim Bullock taking 4th ahead of John Toole and Ed Scott. Gina Spooner took 7th position by 1 second from Andrew Curtis-Rich. Tom Owen was 9th and Glynn Jessop 10th.

Onto the A final 4wd and apart from a couple of laps in the middle where Chris Mills’ Associated B64 snuck into the lead, Craig Harris continued his X-ray dominance and finished 1st, ten seconds ahead of Liam Toole’s X-ray XB4. Chris managed to recover to 3rd ahead of a train of Schumacher CAT K2s, headed by Spencer Farley, Steve Ireland, Martyn Hadley, Jacob Clarke and Gav Gallagher. This left the Carisma 4XS’ of Paul Knight and Ashley Gibbons to round of the final in 9th and 10th. This final ended the racing not just for the day but the for the COBRA club at Marshfield. 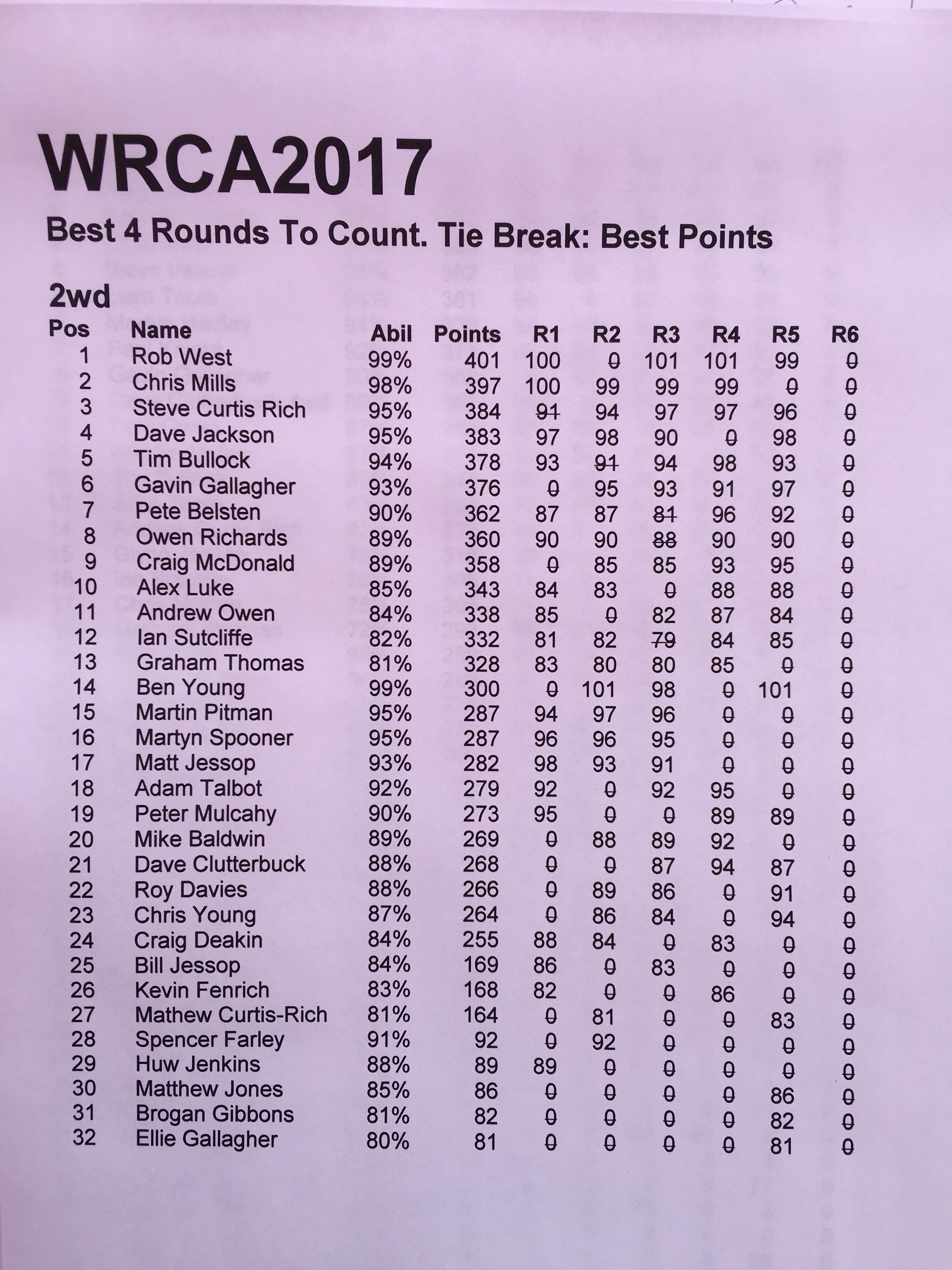 A big thank you to the club for setting up another excellent and eventful day’s racing and good luck to them at their new indoor venue at the House of Sport in Cardiff with their first meeting being on the 20th August.

On the 3rd September the final round will take place at Caldicot RC Racers. Several positions are still up for grabs with some of those who have only done 3 rounds having already entered for the last race of the season.