Final round of the season was held at Brooklands Raceway in Kent on 12th and 13th October . Despite a poor weather forecast many drivers made the trip with points and final championship places up for grabs!

Final round of the season was held at Brooklands Raceway in Kent on 12th and 13th October . Despite a poor weather forecast many drivers made the trip with points and final championship places up for grabs!

Saturday was wet and rainy all day with few drivers venturing on to the track but most preparing “wet cars “ for race day.

Later that afternoon the section had its own AGM with election of committee and proposals voted on for the forthcoming main BRCA AGM.

Saturday morning driver’s briefing gave Muriel and John Russell a surprise with a flowers and gift presentation from all the drivers to show appreciation for all their hard work in keeping the meetings running this season.

The track started to dry by Round 2 with James Conolly moving up to 2nd in 200mm Touring and Barry Abbot taking FTD in 220mm with 15 laps. Gareth Bell took TQ in GT8

Round 3 James Conolly took 200mm TQ and in 220mm Barry Abbott did 16 laps improving his TQ. Chris Slater did 15 laps taking TQ back in GT8 from Gareth.

By Round 4 the rain had started so no change in positions. The rain abated and after a short lunch break the finals listing was up.

Just before the start rain began to pour down with drivers frantically trying to choose the right tyres. Mark Green took the lead with Devendra Mahatme in 2nd and Steward Mcleod 3rd. No change till late in the race with Mark suffering several flame outs but still managing to take the win by less than a lap. Matt Cook came in to change tyres and then stormed up the field eventually taking 3rd from Stewart at the end of the race on the last lap by 1 second! A podium clean sweep for serpent.

Despite the rain stopping the wet track again gave the advantage to the drivers who had selected the right damp tyres.

FTD Barry Abbott carried on from qualifying keeping the lead and eventually winning by two laps. However the next few places were very close all race with Devendra Mahatme and Richard Kozakiewicz closing on 2nd placed Jamie Paton all on the same lap. Jamie held on for 2nd with Devendra less than two seconds behind and Richard the same after 30mins racing.

A relatively dry track saw FTD Chris Slater take the lead in his electric GT8. Chris drove smoothly from start to finish with good pit stop battery changes to take the win by one lap from Paul Bellinger in a nitro GT8 . Gareth Bell took the final podium place.

Next up was the presentation for the overall championships. 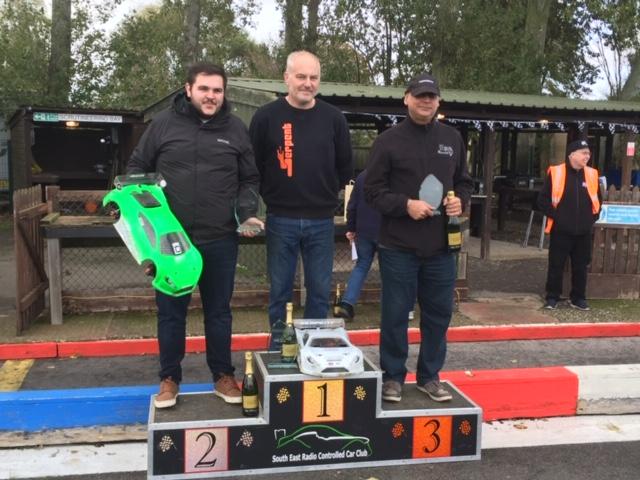 The Trophy was presented by Martin Thurston to Lee Broadhurst for the most funky bodyshell at the meeting.

Another good weekend for the Serpent Drivers .

Another successful season for the 1/10 IC Section with a decent overall entry and some great racing at the various circuits. Hoping for more interest and will warmly welcome all new drivers next year .