The first and second rounds of the BRCA GT12 National Series 2018 were hosted by the Eastbourne Electric Car Club at the Robertsbridge Community Sports Hall, Robertsbridge Community College, East Sussex on Saturday 10th March 2018 and Sunday 11th March 2018. This is a new format this year for the BRCA GT12 National series with 3 venues hosting 2 rounds each over a weekend. Saturday saw 75 drivers attending Round 1 with 73 drivers attending Round 2 on Sunday with most drivers electing to attend both days. The race format for both days was a practice heat, four qualifying rounds and one final. Darren Simpson from EECC welcomed us to the venue and Niall Cochran gave the drivers briefing and then the drivers got down to the serious business of qualifying and racing.

The track was laid on ETS carpet with the introduction of orange dots to mark each apex which guided drivers to the racing line around the track.

Qualifying on Saturday was extremely close at the top end, with Andy Murray and Ollie Payne fighting it out on the track for TQ. Throughout qualifying there was some seriously competitive racing throughout the field. Drivers would need a 24 lap qualifying run to get in to the top 5 in the A Final. Despite Ollie pushing hard in Q4 at his local track it was Andy Murray who took TQ. Mark Stiles, a regular A Finalist with his LMP12 car, was driving a Zen RXGT12 and was sitting in 3rd place after Q1 but eventually qualified 5th on the grid. At the end of qualifying the top ten were Andy Murray, Ollie Payne, Adam Catchpole, Ben Vincent, Mark Stiles, Mark Jewitt, Aidan Ripley, Nathan Goodban, Owen Smith and David Gale. Owen Smith was the top Junior driver of the day.

All the finals (A-H) were run over 6 minutes and saw some tidy and competitive driving throughout. In the A final, Andy and Ollie were out front from the start and convincingly pulled away from the rest of the pack. Andy was pushed hard by Ollie throughout the race and with Ollie applying the pressure he then made a couple of minor mistakes which saw Andy taking a comfortable win. The top 5 drivers all finished over the line in their starting grid order, with Nathan Goodban finishing 6th from 8th on the grid giving him his first National A final finish.

Round 1 - A Final Tech Sheet

The team prize on Saturday was won by 'Team Fantom'

This year the BRCA GT12 committee have introduced a Junior National Championship.

Robert Moore had this to say about his son Joseph. "It wasn’t his first national, I've been trying to get him to as many large events as possible, including the GT12 Worlds last year. We recently competed in all 4 events of the GT12 South East Regional series where he came second overall in the junior section. Over the last year his driving has improved 10 fold and I’m in awe when I watch him race, as he has now surpassed me, and left me standing in his wake. Which brings me on to the last part of my story where I couldn’t afford to do the National series this year. Which prompted Ian

Smith of Horsham RC to start raising funds to support Joseph’s 2018 GT12 National campaign. Between Horsham RC and the wider GT12 community we managed to raise £350, which has made a massive difference. Phat bodies, Kamtec plus local shops provided raffle prizes. Andy Bause (at) our local RC shop (M-Racing) also agreed to provide shells and tyres for the complete series. I’m totally in dept to my friends and the GT12 community...".

What a fantastic story!

Qualifying on Sunday was again extremely close throughout the field and at the top end it was Andy Murray and Ollie Payne fighting it out for the overall TQ. With the track layout the same as Saturday and the grip higher, drivers needed a quick 24 lapper to compete for an A final place. Andy and Ollie set the bar high, both with 25 lap qualifying runs. At the end of qualifying the top ten were Andy Murray, Ollie Payne, Adam Catchpole, Mark Stiles, Ben Vincent, Mark Jewitt, Nathan Goodban, David Gale, Aidan Ripley and Ben Elliott. So it would seem a bit of a 'Groundhog Day' repeat of Saturdays top 10 with the exception of Ben Elliott making the A final, with Owen Smith just missing out and lining up 2nd in the B Final.

So pretty much the same as Saturday... In the A final Andy took a tone to tone win with Ollie chasing him for 6 minutes. This time the top 3 drivers all finished over the line in their starting grid order, with the top 7 drivers finishing in the same position as Saturday's final.

Round 2 - A Final Tech Sheet 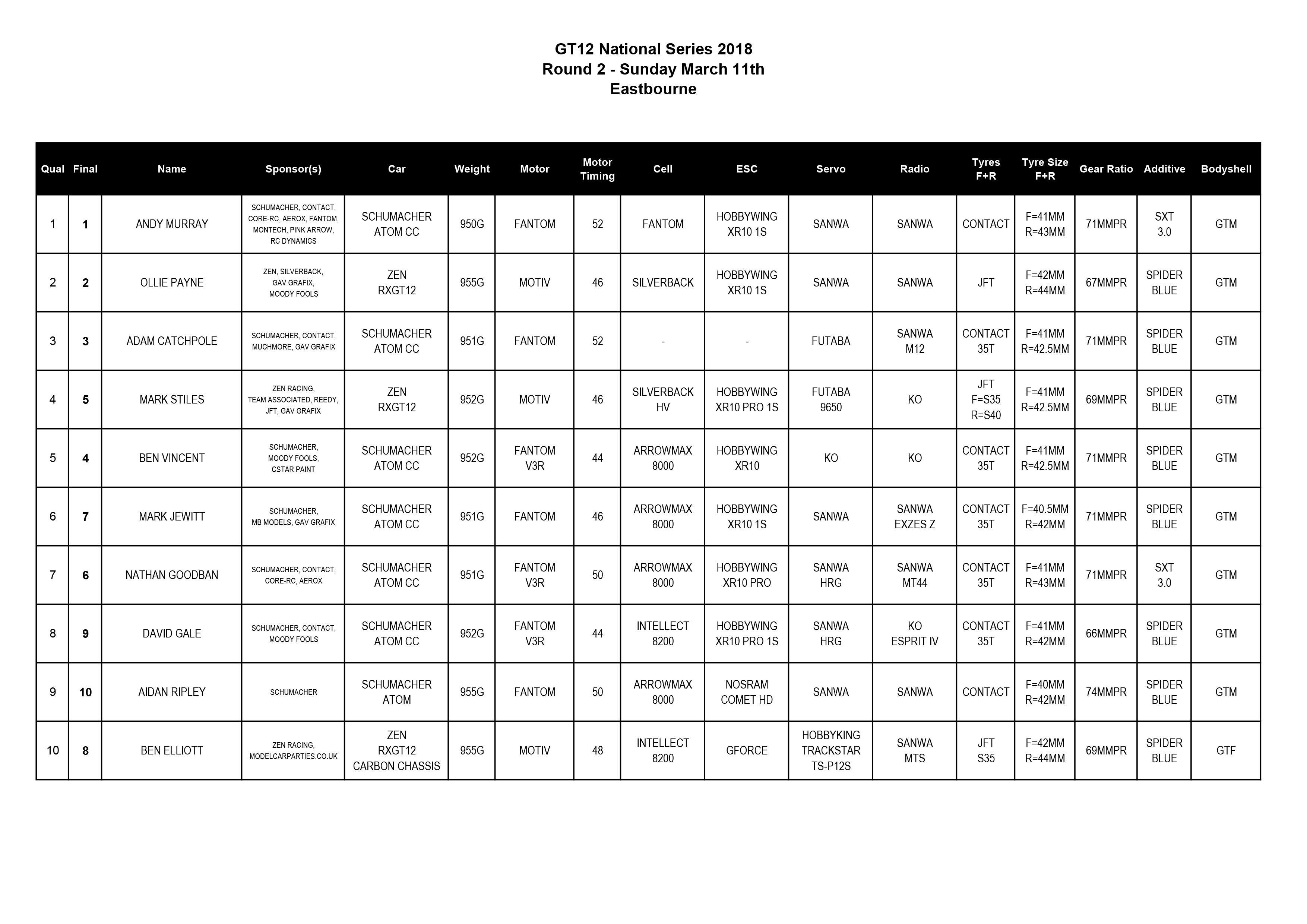 Thanks to the Eastbourne Electric Car Club, their members and the fantastic catering team for a great weekend.

Rounds 1 and 2 finals can be viewed (courtesy of Kenneth Rogers) at https://www.youtube.com/playlist?list=PLnWa-FnAb_Iq2vN8hBNXHLq-tExk8BrTb

Rounds 3 and 4 are being hosted by the Chippenham Model Car Club on Saturday 21st April 2018 and Sunday 22nd April 2018. Get booked in at https://www.brca.org/gt-circuit-events